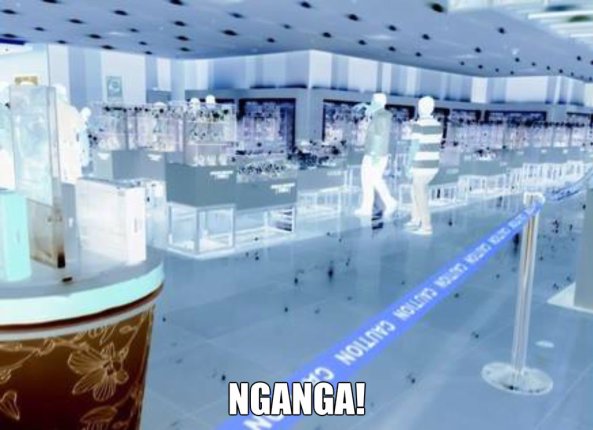 Instead of feeling weary when the news on another inside-the-mall robbery struck last night, there was a slight unsolicited  amusement that rose from the pit of my guts. END_OF_DOCUMENT_TOKEN_TO_BE_REPLACED

For almost a fourth of forever I was not in any mood to scribble away here.  The devastating pork barrel scam and the Zambo fiasco truly depressed my juices and nothing seemed right in the past weeks.  Finally, last Sunday I felt like Lazarus when TV5 screamed away their ‘WEEKEND DO IT BETTER’ block since I really was in need of some booby excitement and anything new might pose a possible potential of becoming our new drug.  Yes, weekend over at the major studios gave us generic products that we actually don’t need.  When Jessica Soho got to be on Sundays; their Saturdays  became a lackluster ; so did the so-called Kapamilya channel where real-life shit drama unfold back-to-back with mediocre shows.  ‘SHOWBIZ POLICE’ at first offered intrigue.  For one, the title is NOT original as it obviously coined [or shoplifted?] from Joan River’s ‘FASHION POLICE‘.  But then, as a race it has been our habit of being too original [pun intended] when it comes to entertainment ideas.  The show’s blurb promised : No showbiz controversy will remain hidden as TV5’s newest showbiz talk show, Showbiz Police, puts a watchful eye on the entertainment industry. Hosted by Raymond Gutierrez, Direk Joey Reyes, Lucy Torres-Gomez and Cristy Fermin, Showbiz Police will probe on issues and provide in-depth analysis to the hottest controversies involving celebrities and prominent personalities. Now that is good enough to tickle some anticipation but when it premiered , there wasn’t anything police-able about the show.  It merely RECAPPED showbiz news that we all know about.  The Claudine-Raymart tiff was a simply anemic take on the issue  and they even bothered to guest Barretto’s lawyer who offered nothing new because of the gag order! Reyes’ take on the video scam bug was suppose to be funny but did not serve the purpose or intent it spoke of, mas malalim ang konsepto ni Aling Taleng sa kanto dahil sa sinasabi nyang tanga lang ang manonood ng sex video dahil wala naman itong halaga kanino man kundi sa mga starring doon.  The Gutierrez segment similarly exposed their faces and Richard did not herald his being a father, and Ruffa flaunted her kalandian.  The show as presented last Sunday was a mere sick residual aftermath of what was expected. Raymond Gutierrez and Lucy Torres are perfect for this fare but  TV5 should merely retire the likes of Fermin and Reyes and look out for brighter industry tidbits that would elevate its status to a respectable clause.  Pangilinan’s addiction to chizmiz should be placed at the right perspective now before it is too late!

Yesterday was such a blessed Sunday for me.  Some Binagoongang Baboy , then Chococake for some fix later truly made me feel good about myself.  But wait, while the top was asleep my phone incessantly sent my privacy to hold.  Early noon, a dispatch reportedly from the EatBulaga management mounted me in extreme curiosity : “Eat Bulaga and Tape Inc. is bound by the rules to maintain the integrity and credibility of the pageant “Super Sireyna”. “Super Sireyna” was created to uplift the image of the LGBT Community in the Philippines particularly the Transgenders/Transsexuals sector. To empower them. To create an impression that is acceptable to the society. To become a good role model not only to the LGBT community but to everyone in general. We regret to inform everyone that our Public Relations Office received numerous complaints about Ms. Garcia’s wrongful doings both in the past and present time. These complaints were solidified with evidences such as photos and videos. However, no further details will provided to the public as a sign of respect to Ms Garcia. After a thorough deliberation, the management made a heartbreaking decision to dethrone Ms. Garcia. A true Super Sireyna should possess qualities of a true queen. Classy and decent. She should set a good example to everyone. We admire Ms. Garcia for her courageous act in admitting the circumstances surrounding the scandal, but we also have to render fair judgment on the grounds of MISCONDUCT by stripping her of the title. This decision is rendered with finality and the Eat Bulaga Management and Tape Inc. stands by it.”   So suddenly we are moral animals? Especially EatBulaga? If EatBulaga certainly is morally erect, then what are we all?  Stripping nude or even having done pornographic acts for kicks or a living is no reason to disgrace a winner proclaimed by an honorable board of judges.  The contest is of no serious content so why do they have to make a big fuzz out of it? If this is true (while we await if the winner Francine Garcia aka Kim Chui is doing EB’s opening today) then we should all rally for morality. Starting most especially on the show’s main hosts who, years back figured in a rape scandal among other pederastic deeds! As long as hindi naman siya naghubad o umaktong malaswa sa EatBulaga, anong problema nyo mga putangina nyo? [UPDATE: THERE IS NO TRUTH TO THE DETHRONEMENT RUMOR SINCE FRANCINE APPEARED IN THE MONDAY EDITION July 29 of EatBulaga]

Then, late afternoon the tv goes a-buzz with the appearance of BILLY CRAWFORD for his first and last interview.  In the wake of the reported Billy-Nikki break-up , he sure fired up interest and whatever he was to reveal after a somehow contrived flow of lachrymal juices would  totally burn fields of speculations.  BUT …the whole mile got so mutilated with cryptic statements that  everybody awaited the lethal question which was never blurted out  by some baldness: ‘ARE YOU GAY FROM ADAM?’ The answer would have capped the gloomy , rainy Sunday this side of the globe hoped for! Ang hatol tuloy ng bayan: BEKIBILLY!