Best remembered for her raspy shrill voice, MYRNA VILLANUEVA or much better known as TIA PUSIT went home to her creator Thursday night at the age of 66. According to her sister , veteran comedienne Nova Villa, Tia Pusit passed away at the Philippine Heart Center , QC ; almost a month after she underwent double bypass surgery.  She is survived by her four children.   END_OF_DOCUMENT_TOKEN_TO_BE_REPLACED

With awesome sadness we bid you farewell MARK GIL…

The week started on a sad note.  Premium veteran actor MARK GIL went back home to his creator on Monday.  I personally knew Mark or Ralph as we called him on the set of ALAPAAP [circa 1985].   END_OF_DOCUMENT_TOKEN_TO_BE_REPLACED

NEWSFLASH : MANILA, Philippines. Queen of Visayan songs Susan Fuentes has passed away after a battle with colon cancer, singer Dulce said Saturday. Fuentes died at 12:20 p.m. on Saturday, said Dulce. She was 58. “I was praying for her on the phone and assured her of the Kingdom where Jesus is waiting to welcome her home, where there’s no more sadness or pain,” said Dulce. “To everyone who helped Susan Fuentes, we thank you so much from the bottom of our hearts,” said Dulce. No member of her family was by her side when she passed away, the fellow Visayan balladeer added.  She had long been estranged from her two children. Fuentes had been living in Quezon City since 1973. Born Susan Toyogan in Butuan City, Agusan del Norte, Fuentes was the fourth of five siblings. Her father was from Bohol, her mother from Surigao.

Lusty vocals . As a singer, Fuentes’ sultry performance was noted for its “lusty vocals and emotional styling.” It was she who, in the 1970s and ’80s, originally recorded and popularized such Visayan classics as “Matud Nila” (They Say), “Gimingaw Ako” (I Feel Lonesome), “Usahay” (Sometimes), “Rosas Pandan.” She is the original singer of that beloved season staple “Miss Kita Kung Christmas.” The repertoire—ranging from Cebuano to Boholano to Ilonggo traditional airs and folk ditties—made her very popular in the Visayas and Mindanao and a novelty hit in Luzon. So popular were they that a few became theme songs for lovers who didn’t even speak the language. The poignancy was in the music, but more so if those lovers understood the lyrics, and then they would be unspeakable.

Authentic voice.The range of Fuentes’ voice was such that she could effortlessly shift from the agony of “Gimingaw Ako” to the friskiness of “Rosas Pandan.” Here is another authentic voice that’s unheard by a new generation of listeners—and neglected by audiences as soon as they’re weaned on engineered voices of warblers who believe too much in their press releases. By age five, she was already joining amateur singing contests. While still in high school, she was featured in Bisaya magazine (Cebuano-language counterpart of Liwayway) for her talent and beauty. After high school, she went to Manila, where family friend Eugenia Molina, sister of singer Merci, helped her sign up with Alpha Records. When she transferred to Jem Recording, she was billed as the Queen of Visayan Songs. Here, she released seven albums, all certified gold records in the Visayas and Mindanao.

NEWSFLASH : Veteran stage and film director Behn Cervantes has died, fellow director Joey Reyes said Thursday. He was 74. Reyes said Cervantes died at 10 a.m. Thursday. Cervantes’ sister Lengleng has confirmed the famed director’s death and said he would be cremated in the afternoon.  She requested for three days of private family mourning. But in a text message sent to media later Thursday,  Lengleng said they have not yet decided on any service until his 10 siblings comply with his last wishes. She thanked all those who offered condolences. She said the UP Upsilon  Fraternity will hold last rites next week but have yet to decide on the day

Highly acclaimed veteran actress AMA QUIAMBAO passed away Friday evening, July 5, 2013 at the age of 65.  Ms. Ama was last year’s Cinemalaya Best Actress for her portrayal as the matriarch in Mes de Guzman’s ‘Diablo’.  Recently, she was reunited with her ‘Himala‘ (1982) costar Nora Aunor in de Guzman’s CineFilipino film “Ang Kwento Ni Mabuti”.  Her remains are at the Arlington Chapels in Araneta Avenue.  In a note, her sister Lui Manansala wrote : My sister Ama Quiambao passed away peacefully at 8:09 PM on Friday, July 5, 2013. She was surrounded by all members of her family and close relatives. Let us pray for the eternal rest of her soul. The wake will be held at Arlington in Araneta Avenue. Details will be announced later. Let us all remember Ama with fondness as a colleague, a mentor and a friend.

Sammy Lagmay, a popular comedian in several ABSCBN sitcoms in the 80s/90s passed away today at 3pm. This according to his sister Mylene.  Lagmay had been suffering from diabetes for a long time . Prayers & Condolence to the Lagmay Family.

The wake for the actor-comedian will be held at St. Peter Memorial Chapel in Tandang Sora, Quezon City.

END_OF_DOCUMENT_TOKEN_TO_BE_REPLACED 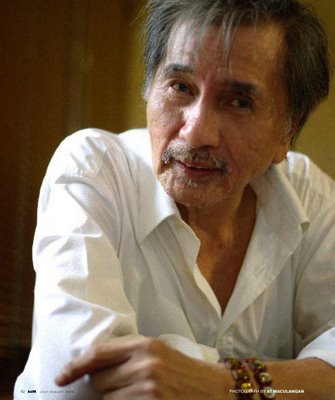