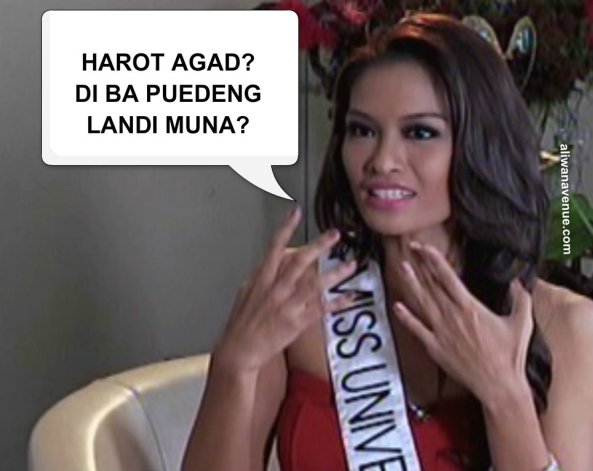 It’s so grabeh talaga lately.  Some girl named JANINE TUGONON grabbed the kamalayan of a lot of uzizeras and epaleros when she made pahiya to her mukhang syokeng bf on national tv!  Apparently, for some ungodly reason she and her ex-jowawista appeared on a show clueless of what was to transpire.  She was definitely given a dark shade by the show kasi while they were cooking tinola some revelations somewhat unknown (or unbriefed to those concerned) stirred a snake’s nest into an uncomfortable state.  Actually it was not Janine’s fault for the bruhaha… it was the show that kicked her right into the bangin! The show was taped and could have easily been edited to retain some dignity into the Miss Universe first runner up!  The poor girl now is the rotten fruit of contention where netizens and your friendly neighborhood tsismosas devour in between tagays of ampalaya wine.  She has been tagged as ‘palengkera’; also kerengkeng when some genius floated that she broke up with her kasintahan for a foreign band member who came to town for a concert. She is not MAHAROT or MALANDI… she is a mere victim of a klamidik show that should have been axed ages before time!