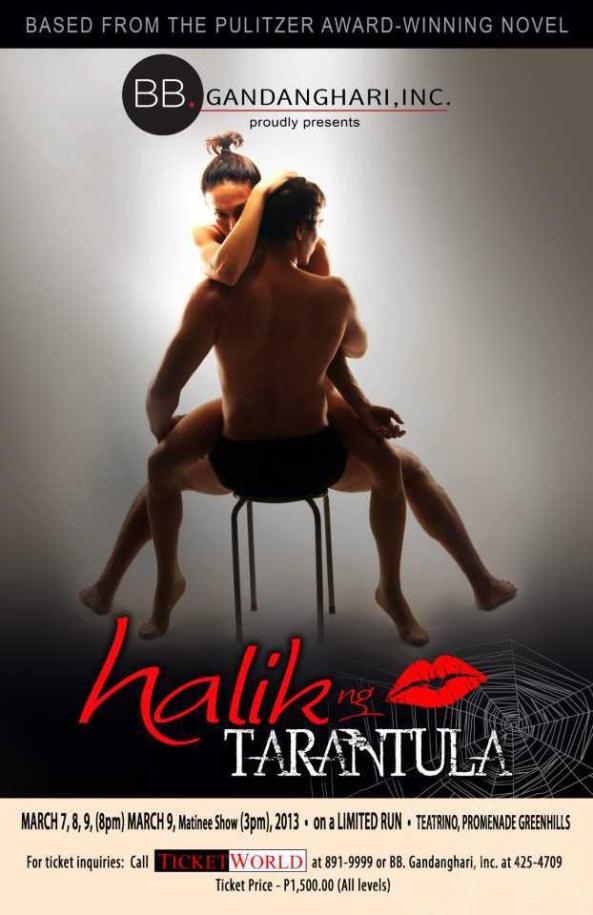 MELL NAVARRO ENTHUSES : Renowned film, TV and theater artist BB Gandanghari will star in the role of Molina in the brand-new stage production of “HALIK NG TARANTULA” on March 7, 8, and 9, 2013 in TEATRINO (Promenade mall, Greenhills, San Juan). As BB Gandanghari, her first foray on the legit stage was the box-office-hit and National Theater Festival sensation “Sayaw ng mga SENIORita” (late 2012), Gantimpala Theater’s play about gays in their twilight years, wherein BB Gandanghari played Raquel Villasor, the homecoming queen, a role tailor-made for her, written by playwright Jose Javier Reyes under Jun Flavier Pablo’s direction. “HALIK NG TARANTULA” is a translation by noted Filipino playwright, Rene Villanueva (mentor of Direk Jun Robles Lana), of the highly-acclaimed “KISS OF THE SPIDER WOMAN“, a story about two inmates of a Buenos Aires prison in the 1970s. One is a political prisoner, Valentin Arregui, and the other, Luis Molina, is imprisoned because of his homosexuality. BB Gandanghari plays Molina while Valentin is alternately being played by former model JET RAI and JOVIC MONSOD (jovic susim as real name). Based on the award-winning novel by Argentine writer Manuel Puig, it was made as a film as Kiss of the Spider Woman in 1985 and as a Broadway musical in 1993. Award-winning director and actor, SOXIE TOPACIO takes the challenge of directing this masterpiece. This will be his second time to direct the play, which was first staged in 1989 by PETA with the late Mario O’Hara as Molina and Julio Diaz as Valentin. Be part of the most challenging and compelling theater history as BB Gandanghari takes the role of Molino in the most anticipated play, “Halik Ng Tarantula”!     CLICK TO WATCH FB TEASER